Get the Catamaran Name Correct!

It's funny how some things will trigger an event in ones memory. I had completely forgotten about this until I just read a blog post about a catamaran that was found drifting without any of it's crew or passengers. There is no trace of the individuals who were aboard! Very strange and sad they were unable to find the three crew members who simply vanished.

Reading about the catamaran reminded me of a funny thing that happened many years ago. My husband was commissioned to paint a small catamaran, which was far from the size of a yacht. The owner wanted it repainted the same color, which was bright yellow. He also wanted to have his nickname painted on each side, which certainly fit his boat as well. His nickname was, "Thick Slice" which he acquired from his friends joking about his weight. Since catamarans do seem to slice through the water the name "Thick Slice" was perfect!

My husband completed the catamaran and the bright yellow finish turned out perfect. He then proceeded to paint the letters to spell "Thick Slice". He finished the last of the letters, and I was anxious to see how it turned out. I entered the shop and began complimenting him on his work. My husband was not too thrilled when I had to bring an error to his attention. What had he done? He somehow managed to get the letters "s" and "c" mixed up in the word "slice" so it instead read, "Thick Clise" and he made the same mistake on each side of the catamaran - lol!

Now my husband never believed in using decals for letters or stripes, so this was not an easy task to remove the letters as they were air sprayed. They were black block letters painted on the bright yellow catamaran, so removing the black paint was a concern in order to also not ruin the freshly cured bright yellow paint!

Oh my, panic set in as the paint was also setting in! We quickly grabbed some lacquer thinner to remove the incorrect letters so he could repaint the incorrect ones. All was well and the catamaran, "Thick Slice" was ready to head for the water. The owner never knew his catamaran was nearly named "Thick Clise" for whatever that may have meant if anything, other than my husband not paying close enough attention! The photo is not the catamaran he painted, but a great example of the size and model: 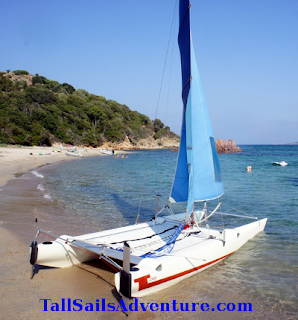