A True Message in a Bottle Story

Every tall sails adventure perhaps has a message in a bottle tale, but this one really pulls at the heart in that it is true, and the event has such a significant meaning to a family, and an entire community. You may have heard the true message in a bottle story about Josh Baker. At the age of 10 Josh decided to write a message and place it in vanilla bottle. His message simply stated, "My name is Josh Baker. I'm 10. If you find this put it on the news." His message in the bottle was dated April 16, 1995 and he tossed it into White Lake in their small Wisconsin town. 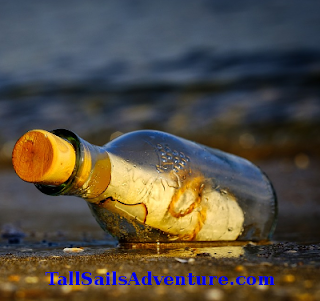 Time stood trapped within his message in the vanilla bottle. Josh grew up and become a young man. He joined the U.S. Marines at 18 years of age, and by the age of 19 he was in the Iraq war.

Josh returned from the Iraq war, but several months later Josh was killed in a car accident. Josh was gone, but his time capsule was yet to be found.

Shortly after Josh passed away, a boy found the vanilla bottle with his message inside. His mother Maggie realized the message was exactly what she needed to inspire her to continue on, as she has two other children to raise. Everyone in town knows the Josh Baker story, and his story will be cherished by many. You wouldn't want to miss reading about a true message in a bottle story.