Clipper ships take us back to an era of fantasy for many, and today you will be granted the opportunity to travel back in time to 1880! As you study this clipper ship trading card, you can pretend it's your boarding pass from 1880 to board the clipper ship Sarah Scott! Have fun as you sail into this story, and fantasize about sailing on the Sarah Scott clipper ship.

Established in 1867 as an international trading organization, Henry W.
Peabody and Co. traded a wide variety of commodities shipped on its own line of chartered wooden sailing vessels, called the Australian Line. The Sarah Scott for Adelaide, Southern Australia and Dunedin, New Zealand was issued by Henry W. Peabody and Co, of State Street, Boston. Actively involved in the China Trade, with its fleet of Schooners and Clippers, Henry W. Peabody was a company built on trust and reliability. In fact, Peabody was the first company to guarantee shipping dates for goods out of Boston. 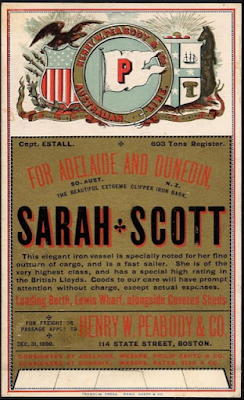 Over the years, clipper ship trade slowly graduated to direct importing on modern ocean carriers; but the commitment to quality and timeliness never faltered. Now imagine sailing on the "elegant iron vessel", also described as a "fast sailor" as you cut through the waters of the high seas.

Departing from Boston on December 31, 1880 you can imagine how the extreme clipper iron bark Sarah Scott managed the seas, as she was considered to be of the highest class! I'm sure sailing on the Sarah Scott would have been an interesting adventure!

Although 1880 has long since passed, vintage and antique nautical treasures still remain. This beauty was offered for auction and fetched $180.50, a nice sum compared to its original cost!

Special permission was granted for me to share this with you. Thank you to jsmithpaper, for permitting me to share this with my readers! Want to learn more? Check out the City of Adelaide clipper.
Posted by Tammara Garland
Email ThisBlogThis!Share to TwitterShare to FacebookShare to Pinterest
Newer Post Older Post Home