Ahoy sailors! You have found a place to explore tall sailing ships under the sails of the sun. We know you will enjoy your stay as you discover fun things surrounding pirate tales, Tall Ships, and just good plain fun. Imagine that you're taking a sailing vacation off to another land and you just arrived at your destination. We hope you enjoy this adventure you found within the big sea of the Internet. Enjoy your trip at sea!

When we learned that the Tall Ships Maritime Festival was sailing into Tacoma, WA near our home town in 2005, it seemed only natural to grab a sailor to enjoy the spectacular day at the waters edge. The first sailor to come to mind was of course none other than my father, George Fosberg.

Shown below is my father along with three crewmen from the Navy of Mexico aboard the "Cuauhtemoc". The photo below was one of my favorites from our Tall Ships adventure as we toured the Cuauhtemoc. I asked the three crew members if they would pose with my father, and without hesitation the one to the right of my father quickly grabbed my fathers hat, and placed his Navy of Mexico hat upon my father! My father was taken by surprise, but then quickly burst into laughter. As we laughed I quickly shot the photo to capture their smiles. Although the photo doesn't show the details of the emblem on my fathers hat very well, it is a US Navy Veteran cap. My father wears his cap proudly everywhere he goes. He guards his hat well, so you can imagine how surprised he was that someone was able to get it away from him! And, my father of course would not have left without his Navy Veteran cap! That's why the caption on the photo reads; "Trading Hats."


Born in 1923, my father took the steps of a hero as he entered the US Navy on August 9th, 1943. A bright young man and unafraid, he proudly fought for our freedom during WW II. He served his time at sea as a Motor Machinist Mate, and along with his fellow crewmen they assured the Captain that the ships diesel engines would not fail.

Aboard the USS LCI (L) 569 Landing Craft Infantry, he not only fought a battle for our freedom, but also a war against waves that were determined to destroy their ship during ferocious storms. They courageously came face to face with war, and the storms in the Asiatic-Pacific theatre. Miraculously, the crew and the ship survived, and he returned home honored with three medals: The American Campaign Medal, the Asiatic Pacific Area Campaign Medal, and the World War II Victory Medal. 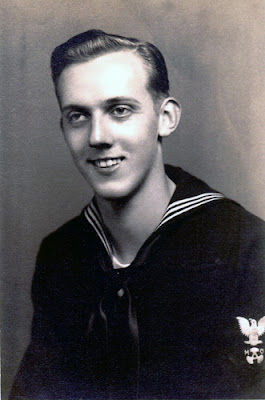 
In honor of my father, and to encourage him to share his Navy war-time experience, it is my hope this blog will serve as an inspiration for him to do so. Okay Dad, you already wrote a ships log on your computer; all you need to do is add a letter B to turn your ships log into a blog! HERE'S to YOU DAD! May this be an inspiration for you to share your memories while serving our country in war-time. We're very proud of you! We love you and Mom with all our hearts, and we thank you for fighting for our freedom!
Posted by Tammara Garland
Email ThisBlogThis!Share to TwitterShare to FacebookShare to Pinterest
Newer Post Home