Waiting to Tour the Ships

The weather was overcast and cool the morning we headed for the Tall Ships of Tacoma Maritime Festival.

Cool weather is typical in western Washington state for an early July day, so it was of no surprise, but it was still quite disappointing to have the clouds rather than blue sky.

Knowing we would have a long walk, I had my concerns for my elderly 82 year old father to walk that far of a distance, but he assured us he was up to it as he was always very active. Young at heart, and physically fit for his age, he joined us in the walk toward the event without missing a step.

My heart was saddened that my mother's health was not well enough to have joined us that day, as I know she too would have been truly amazed at the ships. At the same time I was elated that my father was at least able to attend the event, as he was a sailor in the US Navy during WWII. 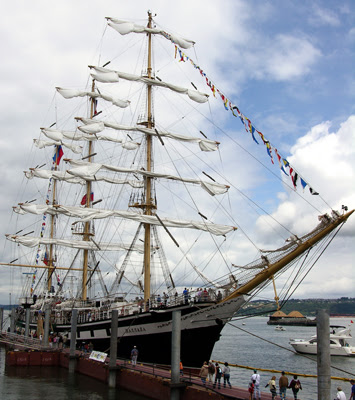 The 2005 Tall Ships of Tacoma maritime festival, took place at the west side of the Foss waterway of Puget Sound near the marina.

With excitement we approached the entry gates for the event, and we stood in awe as we gazed at the wonderful tall ships before us.

No words can really describe the extent of the beautiful details of all the ships.

Wonderfully hand-crafted, each tall ship is truly a masterpiece, and suddenly you imagine you're living in a different era.

Although the wait in line to tour the ships was very long, it was well worth it.

Each step toward the ships seemed to take forever as we were lost in the crowd of people. We patiently stood as we neared our turn to tour the Russian ship called the "Pallada", and the"Cuauhtemoc" from the Navy of Mexico." 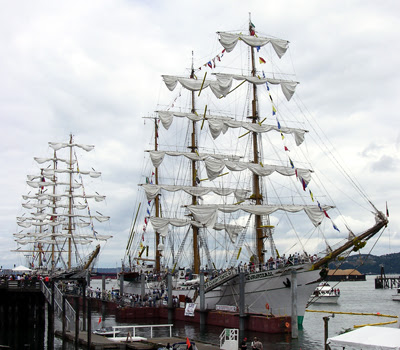 Finally our turn came to board the ships, and my heart felt like a kid again!

As we walked up the ramps to the first docked ship the soft sound of the tied-down sails, and the patter of gentle waves against the ships surrounded us.

Suddenly the size and sound of the large crowds no longer mattered as I became engulfed by the beauty of the ships.

Stepping aboard I imagined we would be whisked away by one of these wonderful ships into a sailing vacation.

My heart longed to take a ride at sea as my senses were taken by the ships glory. With the sails down I could only imagine the beauty of the ships as their full sails would capture the winds at sea to yield to their commands.

My daydream was replaced with reality as we exited the ships, but it became clear it was well worth the wait to experience the tour as we stepped aboard those magnificent sailing vessels.
Posted by Tammara Garland
Email ThisBlogThis!Share to TwitterShare to FacebookShare to Pinterest
Newer Post Older Post Home